Why German CV Photos Are Not Necessary

WHY GERMAN CV PHOTOS ARE NOT NECESSARY

Why German CV Photos Are Not Necessary – Answering this question is more complicated than you may think.

There’s a lot of conflicting advice out there about whether you should have a photo on your German CV. To help you make a decision about whether or not to add one, let’s take a deep dive into the topic.

Many will tell you that adding a photo to your CV is a must to be able to find a job in Germany. They say that HR professionals will reject your CV if it doesn’t have a photo. They further claim it arouses suspicion, making you look like an untrustworthy candidate. They may even think that you’re lazy because you didn’t take the time to follow German job application standards. Even worse, they think that you can show your competence and aptitude for a job through your … photo.

They actually state that by not wanting to be judged by your appearance instead of your qualifications, you appear untrustworthy and/or incompetent.

I cannot overstate how incorrect, morally wrong, and totally messed up this is.

Will Omitting A Photo Prevent Me From Securing Work?

No, it won’t! Many people find jobs in Germany by creating a solid job application, where through a compelling cover letter and CV, they convince employers to get in touch based on their skills, education, and experience, instead of how they look.

Do you know that these days it’s not uncommon for some German companies to ask candidates to submit job applications without a photo? Or that it’s actually against the law in Germany to discriminate against people during the hiring process based on their photo and whether or not one is present on their CV?

What HR professional in their right mind would reject a candidate for not having a photo? If that’s a company practice and part of their selection process, would you even want to work there? I know I wouldn’t.

Bottomline, it’s not necessary to need to add a photo to your CV when applying for jobs in Germany.

People May Tell You That CV Photos Are Very “German”

Since CV Photos Are So Normal, Does It Make Sense To Not To Have One?

There aren’t too many LinkedIn profiles where you don’t see a photo. If you Google someone, it’s not unlikely that you’ll find pictures. If a potential employer really wants to know what you look like, they’ll find you somewhere.

But just because your photo is in so many places, doesn’t mean you have to include it on your CV. As already mentioned above, it’s fairly common to add photos to your German CV and it’s totally acceptable for you to do so if you’re comfortable.

It’s naturally up to you to decide, so long as you’re aware of why adding a photo could impact your ability to find a job.

Why Shouldn’t I Add A Photo To My German CV?

The biggest reason NOT to include a photo on your German CV is that you may get hired based solely on your appearance. Even worse, you may not get hired because of how you look.

Whether people want to admit it or not, humans are filled with conscious and unconscious bias and may discriminate against you based on your photo. Discrimination can come across in many forms, including gender, ethnicity, age, and even how “good” you look.

It’s fairly well established that racism, ageism, and more profoundly influence a person’s ability to find a job, get raises, and/or equal pay. But do you know that people are so affected by other forms of bias, that studies show that people who are perceived as attractive are more likely to get hired than anyone else? Other studies highlight taller people earn more money than shorter people.

It’s mind-blowing when you think about it. No matter how much anyone tells you that your profile will speak for itself, there couldn’t be anything further from the truth.

Over the years, as a hiring manager or part of a hiring team, I’ve been witness to conversations where people have said things like this:

These examples are unfortunately all real. Not everyone will be as blatantly obvious as people were during the conversations mentioned above, but people will still find excuses not to hire people after a quick glance at a person’s photo.

Even though it’s completely against the law to not hire people based on their appearance, it’s hard to prove. Discrimination is normalized and in some German workplaces, even rewarded behavior.

Won’t I Be Judged Anyway When They See Me During An Interview?

Of course, discrimination can still occur when they see you in person for the first time, but at least you got the interview based on your skills, knowledge, and experience and not on how you look.

Are Photos Necessary For Some Professions?

Most definitely. If you work as an actor, make-up artist, TV journalist, model, etc. – including photos is absolutely required. For most other job types though, it’s not necessary.

What Kind Of Photo Should I Use For My German CV?

If you decide to feature a photo on your CV, follow these guidelines:

1) A portrait (headshot) is usually the best. Full-body shots aren’t ever, ever needed.

2) Smile and look as confident as possible.

3) Keep your photo professional-looking. Avoid duck-faced selfies and dress in a nice outfit. This doesn’t mean you need to wear a suit, but make an effort to look presentable.

4) A smallish photo works. Something that you add to the top of your CV, along with your contact information. Large photos that take up an entire page can come across as a bit much and even worse, take up valuable real estate on your CV.

5) If you have the budget, get your photo taken by a professional photographer. You can get one done fairly cheaply at almost any studio in Germany for almost the same price as a passport photo – and they’ll even do touch-ups.

But honestly, phone cameras are so good these days, a shot done in portrait mode will give you a decent photo with no one even noticing the difference. Hint – I’ve only used photos taken with my iPhone and I’ve never had any problems.

When you read articles telling you to go all out and spend hundreds of euros on a photographer, don’t feel pressured to do so. If you’re out of work and don’t have the money for such a luxury, remember what I’ve written here. Photos done at home with your mobile phone are absolutely acceptable.

Your Takeaways For German CV Photos

Ultimately, it’s up to you whether or not you want to add a photo. However, these should be your big takeaways:

1) Photos aren’t necessary for German CVs and are completely optional. Some German companies will actually request for you not to add photos to your CV. Hint – these are the companies you really want to work for!

2) Not adding a photo to your CV isn’t going to stop you from getting a job.

3) At the same time, it’s common practice to add photos to CVs in Germany. So if you’re comfortable, it’s perfectly acceptable to add one. Photos done by a photographer are not necessary either.

4) Knowing this, don’t forget that adding a photo to your CV could mean that people discriminate against you and not contact you for job opportunities.

What do you think about our stance on German CV photos? Do you agree or disagree? Drop us a note in the comments. 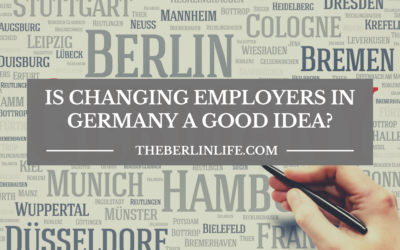 Is Changing Employers In Germany A Good Idea?

When you switch jobs multiple times, it can impact your ability to find work. How about changing employers in Germany? Read our take. 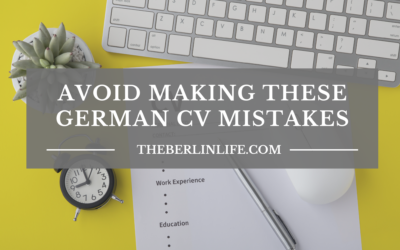 There’s a lot of misinformation out there about applying for jobs in Germany. Let’s help you sort it out by avoiding these German CV mistakes.