What You Need To Know About Notice Periods In Germany WHAT YOU NEED TO KNOW ABOUT NOTICE PERIODS IN GERMANY

What You Need To Know About Notice Periods In Germany – I remember when I moved to Berlin (for a second time!) in the fall of 2014 and had to quit my job in Canada. I was nervous about giving my boss the news and sad at the thought of leaving. I worked for an NGO that does meaningful work, and part of me wanted to remain there. With mixed feelings, I resigned, and while my boss was also sad to see me go, he knew how much I loved Berlin and how I’d been aching to get back. Two weeks later, I had my last day of work, ending with a lovely and emotional farewell lunch with my colleagues.

The sticking point here is the “two weeks later.” I only had to give two weeks’ notice when I quit my job! While typical in Canada, this isn’t the case in Germany, where notice periods are significantly longer.

ALL ABOUT NOTICE PERIODS IN GERMANY

All of that changed when I learned how long notice periods work.

How Long Are Notice Periods In Germany?

Notice periods (Kündigungsfrist) run the gamut of anywhere from 30 days notice, 60 days, 90 days, and for some high-level positions, even longer. Notice periods for board members and other high-ranking executives can sometimes be as long as 12 months. There are often further rules, like providing notice before the end of the month in which you want to resign.

Every company works differently, and I’ve worked for companies that required 30, 60, and 90 days’ notice. If you want to know your notice period, you can find the terms outlined in your employment contract (the contract you signed when you accepted your job offer).

Take, for example, where I work now as a full-time employee with an unlimited contract that stipulates:

If I want to start my next job in November 2022, I need to give them notice by July 31, leaving me with them for July, August, and September. If I provide notice on August 1, I’d only be able to start my new job in December.

How Do Long Notice Periods Benefit Everyone?

Long notice periods are mutually beneficial to both the employer and the employee.

Benefits for companies include:

Long notice periods exist to protect employees as well. Benefits for employees are:

Using my situation as an example, if my company decided to make me redundant, they’d have to pay me for three months. I’d also get an additional half month’s severance because I’ve worked there for over a year.

Terms for notice period vary by employment type and it’s important to know how it works for each case:

1) Full-time Employees – In addition to the notice period outlined in their employee contact, full-time employees (Angestellter) with unlimited contracts (unbefristeter Vertrag) may have more extended notice periods based on how long you’ve worked there.

Read the German Civil Code for more information on what the additional notice periods are for varying lengths of service.

Good companies sometimes pay more than the two-week minimum if you get laid off during probation. I was laid off once during my probation, and the company awarded me six weeks of pay, three times more than what they were legally bound to pay. Note – depending on their financial situation, not all companies will be in a position to do this, and some companies won’t be willing to do this at all.

Probation periods allow both the employer and employee time to evaluate one another for a good fit, enabling either party to part ways quickly and easily.

When a company acknowledges you passing probation, it’s a big deal. It means they value your work and are committed to taking on the financial responsibilities of keeping you on board. This is why probation periods are such a big deal in Germany and a reason to celebrate once passed.

3) Part-time Work or Fixed Contracts – If you work in a part-time job (Teilzeitbeschäftigter) or a job with a fixed-term contract (befristeter Vertrag), your rights are covered by the Part-Time and Temporary Employment Act (TzBfG). If your contract is for more than three months, notice periods are usually four weeks, and if your contract is for less than three months, your company can mandate a notice period of fewer than four weeks.

4) Freelancers – Unfortunately, freelancers don’t have the same protections as salaried employees. Notice periods are usually part of a contract when a company and a freelancer start a new engagement. If either side wants to terminate the contract, both parties are legally obliged to follow the terms they agreed upon previously.

Employment contracts can be canceled by the employer for various reasons:

1) Getting Laid Off – A company can lay you off for business reasons (betriebsbedingte Kündigung), as part of a cost-savings restructuring, or if they are going out of business, for example. The onus is on the company to prove that your job doesn’t exist anymore and there are no other open roles you could fill.

2) Getting Fired – While more rare, a company can let you you based on your conduct (verhaltensbedingte Kündigung), like always being late for work, not doing the job well, and more. Before they let you go, the company must provide at least one written warning (Abwarnung). Hopefully, it will end there, and your employer will give you a chance to improve your work and arrive at a mutual agreement on how specific issues can be addressed. They must also pay the required notice period if they still decide to let you go after the written warning.

If you’ve done something severe, like committing a crime, a company can issue a summary dismissal (fristlose / außerordentliche Kündigung) that will see your employment terminated immediately.

3) Getting Let Go Due To Illness – As unbelievable as it sounds, a company can let you go if you’re unable to work over the long term because you’re sick (personenbedingte Kündigung). In such cases, you can still receive sick pay through your health insurance company.

When You’re Terminated By A German Employer

Details including monetary amounts, your final working date, and more will be outlined in a formal separation agreement (Aufhebungsvertrag) provided by your employer.

Whatever you do, don’t sign the agreement right away, even if they pressure you to sign it on the spot. If you do so, you won’t be able to contest it at a later date.

You have the right to take some more time to think about whether you want to accept the agreement “as is” or if you want adjustments to be made. Having the termination agreement reviewed by a German lawyer is recommended to help you determine if the agreement is fair and help you obtain a more favorable settlement.

If you believe you were wrongly dismissed, you can challenge it by filing a legal complaint and taking it to court. You have to do this within three weeks of receiving notice from your company. While the legal process could prove time-consuming and expensive, you may be able to negotiate a severance package (Abfindung).

I advise you to take out legal insurance to secure support should such a situation occur.

When You Resign From A German Company

You need to notify your employer in writing when you plan to resign. Copies of your resignation letter should be provided to your manager and People team.

Here’s an example of a resignation letter I used when I gave notice to my previous employers in Germany:

Once you give your employer formal notice, you can work out your final working date. It can often be reduced by using up any earned vacation days. If you’re eager to move on to your new company, some employers may agree to you leaving earlier. They’re not obligated to do this so they may decline your request.

Employers can also opt to end your work earlier than the legal end date – this is common when they run out of work for you to do. In any case, they still need to compensate you accordingly.

When you resign, you can also ask for a letter of reference. Having one on file is good practice, as you can use it for future job applications.

Long notice periods are beneficial to everyone involved and are something to truly appreciate about working in Germany.

This type of generous severance and protection is almost unheard of in Canada, and it immediately turned me into a fan of long notice periods. It makes me feel safer knowing I have a financial safety net that will give me plenty of time to seek new work opportunities.

Long notice periods are something that’s very unique to Germany and offer workers benefits that cannot often be found elsewhere. Many people feel overwhelmed knowing where to search for jobs in Berlin. Bookmark our best Berlin job search websites list to get started. 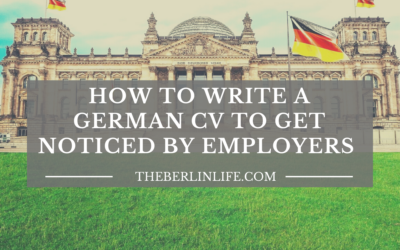 How To Write A German CV That Will Get You Interviews

Get the lowdown on how to write a German CV. Know what to include and to leave out, as well as other success tips. Are you looking for a job in Berlin? Then check out this ever-growing list of companies in Berlin that are hiring right now.