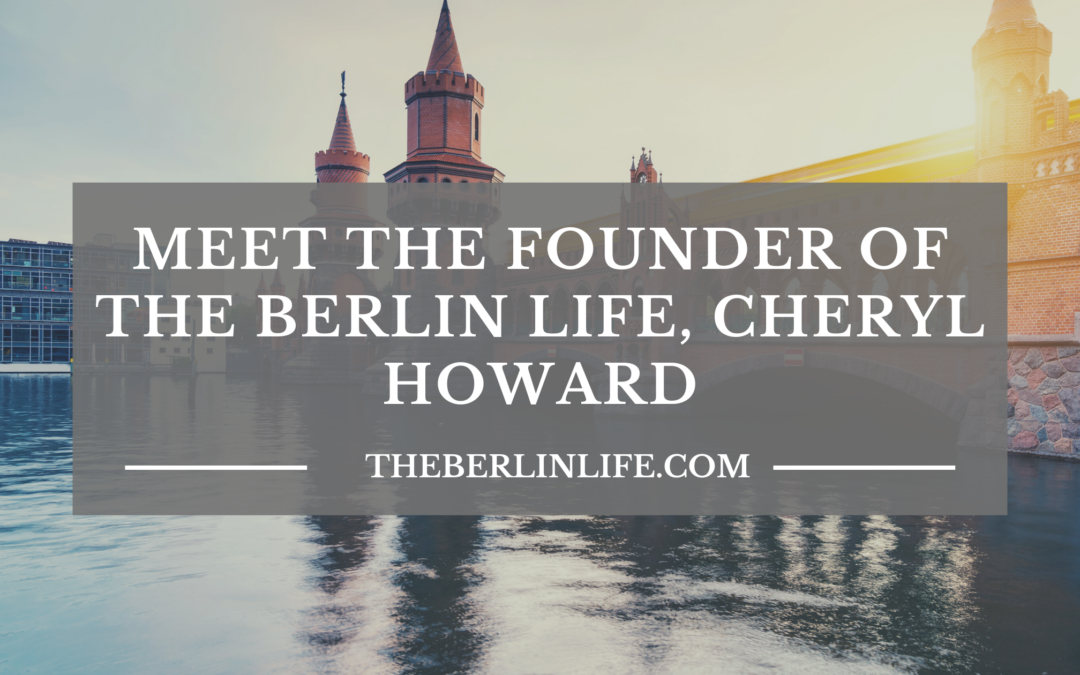 Meet The Berlin Life Founder, Cheryl Howard – 2021 has been an exciting year for The Berlin Life and for me, personally. As our online community has grown a lot and the number of new visitors to the website has substantially increased, I thought I’d take the time to introduce myself. You can learn more about who I am, how this website came into being, and the values that we hold.

Moving Across The Planet From Canada To Berlin

So hi! I’m Cheryl, originally from Canada, and I’ve been living in Berlin since 2011.

I first came to the German capital on a youth mobility visa, also known as a working holiday visa, in June 2011. When I arrived I didn’t know anyone, speak a word of German, or have a job. I’d never been to Berlin for that matter! I also came completely alone.

Read my way more personal story if you want to know why I really moved to Berlin.

Despite the fact that the odds were against me succeeding, I harboured a fierce desire to make Berlin my home and was determined to do whatever it’d take to make it happen. Even with initial difficulties finding a job and missing home a lot, I fell in love with the city. It was hard to believe that a place that I’d never been to or even knew much about would feel so much like home that quickly.

I ended up staying for 18 months. During that time, I changed my visa type so I could stay beyond the one year period granted with the youth mobility visa. I became a self-employed freelancer, making a living from my travel blog, writing for a local hotel blog, and working as an IT project manager for a local MedTech company. A bizarre combination of jobs to say the least, but it was really such a fun time of my life. I’d spend a few days working in an office, and then another day, jet off somewhere on an all expenses paid trip.

Sadly, things didn’t work out and for personal reasons I went home to Canada in 2013. During that time, I missed Berlin a lot  (it was all I thought about!) and did everything I could think of to move back. I took coaching sessions with a Berlin based relocation specialist, applied for jobs, and took German classes, all the while I was still in Toronto. I finally moved back in 2014 and have been in Berlin ever since. And now, I’m very sure that I’m never going to leave.

Working In Berlin And Being Made Redundant

Upon moving back, I stepped out of the freelance game and started working fulltime as a scrum master with a Blue Card visa. Sadly, the startup I worked for went out of business within less than a year of my arrival. I found myself desperately looking for work and I scored a job soon afterward, this time working as a content writer for another tech-based startup. This required a change in visa, which met I lost my Blue Card and received a regular residency permit instead.

The plot thickened three months into the new writing job, when the company laid off many Berlin employees, me among them. Completely heartbroken, I found myself on the job hunt yet again. It didn’t take long to find another job and this time, I returned to the world of tech working as an Agile Coach for yet another Berlin startup. It was my third role in less than 18 months.

This time round, the foreigners office weirdly denied me a Blue Card – even though I had one before. They claimed that they didn’t recognize my business degree, which they had in all previous visa applications. Despite the oddness of the situation, I was happy to have the regular working permit, which meant I was able to stay in Germany.

Then guess what? A year and half into that job, the exact same thing happened to me again. The company restructured and laid off hundreds of people and I found myself unemployed once more.

It felt like I was perpetually looking for a new job, an unfortunately common Berlin experience. Some even say that you’re not a proper Berliner until you’ve been made redundant a number of times. While that’s an amusing anecdote, I’d be lying if I said the constant job switching didn’t get me down. Even though all of the layoffs were beyond my control, I took it personally and it severely affected my confidence. It took a lot of work (and years of therapy) to fully get past this.

When I got laid off that time round, I actually didn’t mind as I’d already found another job. I knew the signs to watch for (it’d been fairly obvious the ship was sinking) and I’d been doing interviews for a few months already. So I enjoyed two months of paid leave, before starting work as an Agile Coach for a travel brand.

The new gig worked out and I stayed there for 3.5 years, finally achieving the stability that had so long eluded me. The Foreigners Office was also generous enough this time to reward me with a Blue Card, paving the way for me to get that prized permanent residency in 2018. But then the pandemic came along and my company was hit hard, going into the Kurzarbeit program. Reduced salary and hours weren’t for me, so I started my job search which lasted about three months.

Searching For A Job In Berlin During The Pandemic

I applied for jobs at about 20-30 companies, never hearing back from some, and even getting immediately rejected by others. I also had a number of interviews, sometimes never getting past the screenings and other times getting quite far into the recruiting process. I did numerous trial days, completed so many tests that my head spun, and led a number of remote hours long workshops. Toward the end of the three months, I got two offers in the same week, and of course, I accepted one of them.

I must say, quitting a job on my own terms was a refreshing change from times past. I started my new job at the end of last year and as I’m about to celebrate my one year anniversary, I must admit I couldn’t be happier than where I’m at right now.

What a story right? To sum it up, over the course of a decade, I had five different visa types, worked as both a freelancer and full-time employee, and had to find a new job several times. I then found a new job early on during the pandemic, which was no easy feat.

Remember the travel blog I mentioned above? In addition to writing about travel, I also spent years writing a lot of content about Berlin. This actually became a life changing thing and as I look back, I find myself getting emotional thinking about how many unexpected opportunities happened as a result of my Berlin content.

Take for example, my post about making friends in Berlin which I first penned in 2013. It became so popular that it led to a friend and I starting a meetup group and at one point, we became one of the biggest social meetup groups in the city. We had events at beer gardens, nightclubs, and art galleries that attracted crowds in the hundreds. Eventually, running the group became too much work and not enough play so we closed it down but even still, I have fond memories.

In 2013, I published another post about how to find a job in Berlin and it became my site’s top performing post. By request of readers in early 2020, I even led an in person workshop with about 25 attendees about finding work in Berlin. Around the same time, I also created our Facebook group, which is now more than 8,300 people strong.

Kicking Off The Berlin Life

I knew I was on to something, but I didn’t know what just yet. I had the content and a community, but I wasn’t really putting my skills and experience to the best use.

Not only that, I felt that the content and services on the market about moving to Berlin and finding work upsetting for a number of reasons. So much of it is high-level and superficial, glossing over relevant issues like racism, ageism, and other things that very much impact a person’s ability to move here and find work. A lot of information is out of date (i.e. telling people to put marital status and date of birth on a CV) and many times completely incorrect, or even blatantly plagiarized! People brand themselves as relocation experts based solely on the fact that they moved to Berlin and lived here for a few months. Some call themselves coaches despite having no relevant experience or professional certifications. Others build and center their brand around themselves – their story, looks, obvious wealth etc. rather than their customers.

After a lot of research and thought, in 2021 it all became crystal clear. I started The Berlin Life to help people move to Berlin and find work and established this as our mission, “We’re a community minded hub of information and services that make moving to Berlin and finding work easier.”

While it’s still very much in its infancy and an ever evolving work in progress, the offerings now include career coaching services, e-books, free guides, workshops, and more. My hope is that we’ll be different through high-quality content and services that’s inclusive and accessible to different groups of people, also tackling tough issues in a caring way through honest discussions. i.e. Looking for work in Germany is hard and the experience differs for each person. We’ll never tell you that it’s easy or that being fluent in German isn’t essential. Although we keep it real, you’ll also find advice about how to overcome potential obstacles. You can read more about the core values that guide all we do.

At the same time, I’m putting my coaching and recruiting experience to use and for a higher good. I cannot even begin to describe what a joy it’s been to help people create better job applications that not only presents a better version of themselves, but also better positions them in finding a job.

It seems that people like what we’re putting down, so to speak. The Berlin Life is now backed by a thriving, supportive, and growing community. Our mailing list is also growing day by day, as is the website traffic. We even got a major feature in Buzzfeed and I was asked to speak on CBC back in Canada! Also, did I mention that this is only my side hustle?

For a site that hasn’t been around that long, I’m extremely proud of what has been achieved so far and I’m excited about what’s coming up for us in 2022.

If you’re still reading, wow! Thank you. I hope that you come away a better understanding of who I am, how this site came into being, and the values we love by.

Most of all, I hope The Berlin Life is contunies to be a valuable resource and our community a welcoming one.

This function has been disabled for The Berlin Life.